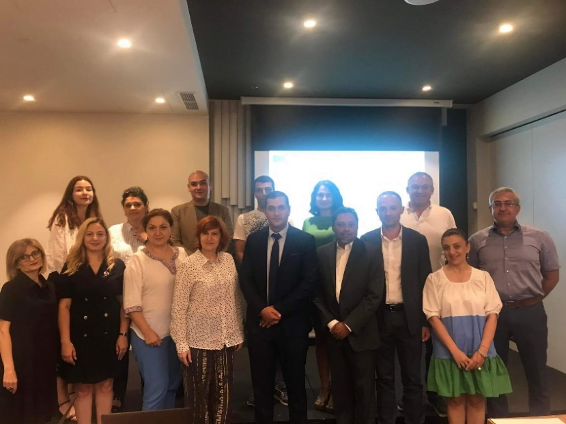 AADH Supported WHO Mission on HIS / Digital Health in Armenia

AADH President, Prof. Georgi Chaltikyan was invited to participate in the joint WHO Mission on Assessment of Health Information System and Digital Health in Armenia that took place on August 29 – September 2, 2022. The mission led by the Health Information System / Digital Health specialists from the WHO European Office in Copenhagen, and the WHO Armenia Country Office, conducted evaluation of the country’s health system and the level of its digitalization, and delivered a report shared with the country’s Ministry of Health that contains a SWOT analysis and a set of recommendations to support the digital transformation of Armenia’s healthcare system.

Prof. Chaltikyan was specifically invited as a representative of academia and the non-governmental sector, to describe AADH efforts in promoting a strategic vision for Digital Health in Armenia (the Armenian Digital Health Initiative), and the novel double-degree Master of Digital Health launched at the Russian-Armenian University in 2022.

The mission included a high-level multistakeholder meeting with de-briefing by the WHO officers on their findings, as well as a productive discussion on the development of Digital Health in Armenia. In attendance were representatives of the following structures and institutions (besides the hosts – WHO Country and Europe Offices): EU Delegation to Armenia, Ministry of Health, Ministry of Labor and Social Affairs, National eHealth Operator (ArMed), National Institute of Health, Yerevan State Medical University, Russian-Armenian University, and Armenian Association of Digital Health.

Prof. Chaltikyan began his opening remarks by mentioning that the meeting could as well be regarded as a first step towards creation of the Digital Health Council (DiHCon) – one of the key measures described by the Armenian Digital Health Initiative. He then highlighted the need to maintain such multistakeholder dialogue in Digital Health, and described in brief the strategy development and capacity building efforts by AADH. The subsequent discussion was focused on the findings, the SWOT analysis, and the recommendations of the WHO mission, and reflected multiple aspects of the digital transformation of the country’s health system.

Prof. Chaltikyan also expressed hope that such multistakeholder meetings will continue on a regular basis, and will provided a framework for strategic development in Digital Health – which is also among the key recommendations by the WHO mission.

Be The First To Know